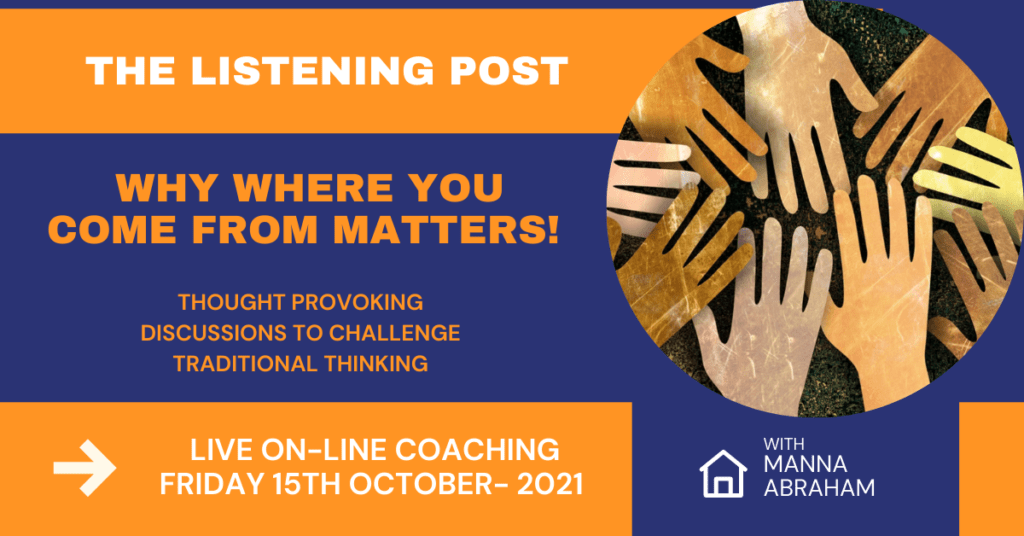 Stop letting your generational past dictate your present and future decisions.

I hope you have had a good week. Mine has been full of completions both personally and professionally, which means I can now concentrate on embracing new challenges and living in the moment.

This week I would like to talk about why – where you come from, matters.

You see, many of the time, we are stuck in life, not because of our inabilities or lack of a skill set.

But simply because of our strong held beliefs from our past, where we come from and how we were brought up.

The echoes of the past still reverberate in your life today. They play out in every decision, every thought and every discussion you have.

The truth is, quite honestly, it is not your origins but the destinations that define you.

The successful people of the world, financially or intellectually, come from very humble beginnings and sometimes from very poor families. Yet, they made it BIG and the past didn’t condition their future.

When you think about it, we are all migrants in some form or another with humble beginnings.

Where we live now is not where we are originally from.

Whether it was you, your parents, grandparents, or ancestors, you are where you are right now because of a decision that somebody in your recent or not so recent past made. All decisions were made with nothing more than the hope of something better.

The good news is – You can change that decision NOW.

And now, countries are defined by where they are today and not by their origins. In fact, what are countries and continents anyway but invisible borders that give the facade of protection and pieces of land separated due to millions of years of geographical changes.

That means that background, class, societal orientation, linguistic issues, physical ability or incapability actually don’t matter at all, until you make that decision to let it bother you.

You see, I had a client who had generational alcoholism in his family and, although he wasn’t an alcoholic himself, he was gripped by the fear it might consume him also.

Another, witnessed her mother’s prostitution and led her to be fervently against it herself.

Yet another witnessed a very successful mother and father. That crippled her ability to take decisions and move forward because of the fear of disappointing everyone else around her and becoming a black sheep of the family.

In all the three cases, it was the decision they made to allow or not allow the past to dictate the future.

So what does that mean for you?

You find what you focus on – Period.

Be it gender bias, diversity, race or culture.

So, are you stuck in a generational belief that is affecting your every decision now?

Is that belief based on the hope of a better future OR in an attempt to protect your past?

What are you focusing on?

I Look forward to hearing your thoughts and insights on the listening post next Friday, 15th Oct.

P.S If you’d like to operate authentically and not make decisions based on the negative decisions that were forced upon you, book a chat with me Here. It’s FREE, confidential and transformational.

PrevPreviousSexual Identity – What You are Not Been Told!
NextScience Vs Religion – Which Needs More Faith? – Are both just a perfect waste of time?Next